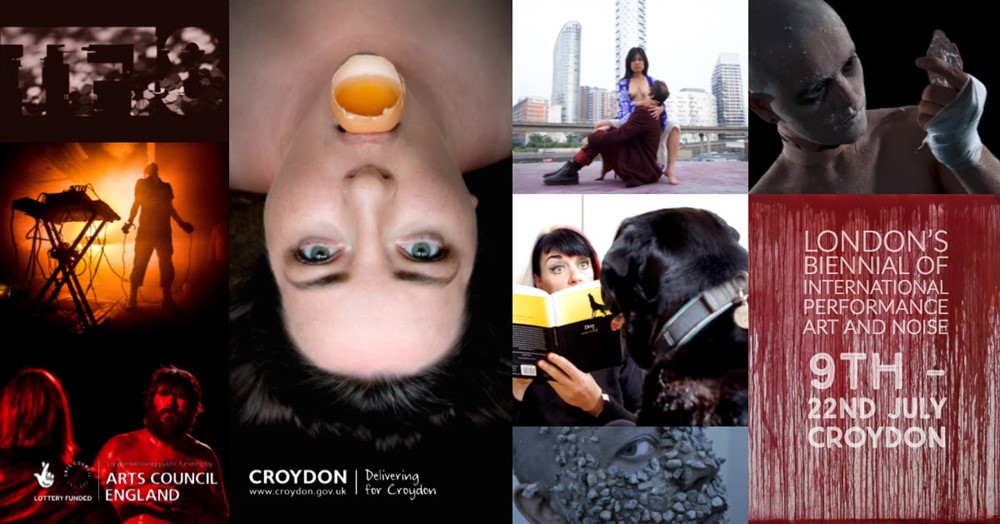 An interview with Thomas John Bacon, Artistic Director and Founder of Tempting Failure.

With a focus on underrepresented and risk-taking creative practices, Tempting Failure biennial festival of performance art and noise returns to Croydon this summer with a programme of over 50 international artists, workshops talks and more. From extreme body performance to contemplative sound artworks, TF18 is an unmissable event for creativity, discussion and experimental practice.

The festival is unique in its outreach programme, which has been occurring over the past few months in the run up to the festival. TF18 also provides a crucial mentoring programme which offers talented new artists the opportunity to develop work for the festival alongside established creatives.

Thomas John Bacon, the artistic director and founder of TF gives us some insight into the festival origins, what to expect this summer and his own artistic practice.

Tickets are now on sale for 14 nights of performance art and noise, check out the full programme HERE.

Over the past seven years, Tempting Failure has held festivals in Bristol and different areas of London. This year TF18 is exclusively taking place in Croydon. Why did you start running the festival and how did it end up being held in Croydon?

I started the festival for a variety of reasons, many of these are probably well documented by now. There were research reasons, artistic rationales and a desire to do something that was missing from area I was living in. But I think today I will talk about the opportunity I wanted to create for others.

I was a solo artist and the work of myself and my peers didn't have a home that could celebrate our practice beyond the underground. We sat - perhaps - in the less fashionable areas of performance art and certainly on the edges of the UK live art umbrella. We were working with our bodies viscerally, inspired by the actionists of the past, overshadowed by the few who had worked in this way since, but doing something very different with the medium. Philosophically, if not metaphorically, utilising our selves, our flesh, blood and bodies but finding new meaning, new reasons that hadn't been before.

Understandably this work could be hard to programme, and logistically difficult to realise. But what drove me the most was I wanted to create a space that could hold genuine risk. Not just obvious physical risks, but political, psychological, sociological and for established artists, potentially career risk; all of which would encompass works beyond body-based ones and hold the spectrum of performance art practices.

I had never wanted to curate or fetishise failure, but rather afford artists an opportunity where if failure occurred, TF would genuinely be a place where the fact that they took chances was celebrated.

Over the 7 years from these early beginnings - the first TF was 1 night and this latest version is 14 nights, as well as now holding many months of community outreach, professional development programmes and educational artist support - we are now in a position where we have become a Biennial in my home town of Croydon. A borough of London that has often been the punchline to many jokes, and was culturally decimated when David Cameron came to power.

I had been living in the South West during this time and when I came back I was shocked to see how the places that had supported my artistic growth as a teenager were gone. But a cultural resurgence began a few years ago, spearheaded by community initiatives and start-ups. Organisations like Matthews Yard and Turf Projects are a big part of this and in 2016 we brought a week of events to the town and found the thirst of its audiences to be like none we had ever encountered.

Croydon is the perfect home for TF, it has constantly tempted failure in its own right but has risen up and with the emergence of its Croydon Cultural Network it is the hottest place to be an artist in London right now. TF will continue to be a massive part of this and that brings me huge pride.

Can you tell us about this year’s provocation?

The notion of Fractured Bodies came initially from an internal sense of personal strife that began to echo with a wider sense of geographical, political and metaphorical separation of bodies.

My own life has gone through a lot these past 7 years and it somehow became resonant with the politics of our time. Despite the growth of fascism, conservatism and extremism in our lives and the mediatization and bombardment of technology upon our selves, there was a growing sense to hold one another.

I wanted TF18 to draw those voices who had felt silenced together, to shout and be outraged about anything they felt was fractured within themselves and without the wider world, but also to ensure that this will not be a waste of breath; that audiences listen, we question, we disagree and we celebrate both difference and unity with equal measure.

And where does the focus on mental wellbeing for TF18 fit within this?

The three company directors of TF have all got close connections to mental health for a variety of reasons and so we felt it was right that we start to intrinsically weave strategies of care throughout the festival from application to programme and then production for our artists and audiences alike.

It's our first step towards it this year but we have taken some great advice from our friends at Unlimited and Bethlem Gallery and we are very pleased to be working to support SANE this year with a specific commission. It is by no means a finished thing but we didn't want to rush this and tag it on but rather maintain our own festival identity and gradually weave this through our foundations.

So, as an artist-run initiative on limited resources we are really proud of some of the elements we have managed to incorporate so far from adaptable application strategies, silent spaces in the festival for artists, yoga, deep tissue massage and sound mediations, select relaxed performances and the start of a working group for producers on managing their own strategies for self-care.

There are not many other festivals of performance and noise art. Can you elaborate on the festival’s focus on these two kinds of art?

This focus originated in our second year during 2013 and simply came about because as a non-audiophile who loved seeing and experiencing experimental sound works - I started to have conversations with some of these artists who had never looked how close what they were making was to performance art. To cross these two worlds over with one another has not only brought new audiences together but has seen the birth of collaborations between artists from both fields in ways that are really exciting.

What can people expect from this years’ programme?

There is so much to choose from! 468 artists applied to be in the biennial this year and we have a final line up of 70, representing 20 countries. There’s a wealth of homegrown and local talent, and we’re supporting all from graduate and emergent artists through to career and established names.

I must say though that I am thrilled to be hosting a retrospective in celebration of Hermann Nitsch's 80th birthday this August. It was such an honour to meet with him earlier this year and he has granted TF18 permission to screen a selection of pieces chosen by he and I. His Orgien Mysterien Theater aktions often involve slaughter, butchery, religious sacrifices, crucifixion, as well as noise, dance, celebration, ritual and rapture, so they were perfect for our festival! And the viewing experience on film is no less impactful, creating beautifully shocking imagery that holds its audience in awe. Each aktion will be screened only once; shown in full and uncut.

Can you tell us about your own creative practice and what connection it might have with the festival?

My own performance practice is rooted in the body and concerns itself with the phenomenological implications of perception. I am often able to create quite exposing work that I have been told shares a sense of genuine vulnerability. Last year I had a residency with the Sidney Nolan Trust which was instrumental in allowing me time to refocus and for 2019 I am currently looking for outlets to host a new piece (so get in touch).

This new work sees me return to this fragility of the body but through the eyes of exploring a psychogenesis landscape. TF therefore resonates with my love for a certain kind of performance art and is also a source for much of my scholarly research; currently I have been commissioned to write a book Intellect which will celebrate many of the artists we have hosted over the years but reconsiders their performance practices through the lens of phenomenology.