For the AXIS commission we’re developing a new work in response to If You Can’t See My Mirrors I Can’t See You (IYCSMMICSY), a video we made together 10 years ago. At this midpoint in our residency we’re using this text as an opportunity to reflect on IYCSMMICSY and our other works that incorporates physical and allegorical mirroring, as well as moving-image and writing that has inspired our current thinking.

The structure of IYCSMMICSY was a recording of a video call about the making of the work, made using screen recordings and other cameras in our homes. This was in the early days of Skype, and live video feeds generating double-portraits were novel. There was magic in how the computer screen functioned as both a mirror and a lamp, as well as creating an instant window into each other’s world. Using a video call as the basis of a work feels pertinent in new ways today. Life can interrupt the form (and formality) of an online chat - something that has been captured to humorous effect in multiple pandemic memes. IYCSMMICSY didn’t focus on our emotional lives much. We are now interested in the parts of our lives that may spill in or out of the frame of a call.

Reflexive consideration of the personal by artists - Chantal Akerman surveying her life through her relationship with her mother or Sheila Heti considering whether to have children in Motherhood - tend to be authored by one person. We’re interested in how a similarly reflexive approach can operate between two people, and what the effect of this might be. Whilst we have had comparable life experiences (like many co-authors) we want to explore the potential for difference and how the nuances of more than one person’s subjectivity, emotions, personal life and space can exist in an individual biographic work co-authored by two people.

We made IYCSMMICSY at a point when, although we were not aware at the time, our long and intensive period of collaboration was coming to an end. Recently, we’ve been thinking about the challenges and nuances of making co-authored moving image work. Agnès Varda’s Elsa la rosé (1966) feels particularly relevant as it captures some of the complexities of different subjectivities existing within a relationship, as well as employing physical mirrors and reflection to poetic effect. It was initially meant to be a co-authored pair of films, one by Varda’s partner, filmmaker Jacques Demy, the other by Varda herself. The idea was that Varda would profile poet Elsa Triolet through the words of her husband Louis Aragon, and Demy would look at Aragon through the eyes and words of Triolet. But Demy dropped out. Maybe this isn’t surprising: if the project had been co-authored, the work would have been an indirect reflection of Varda and Demy’s own relationship - Aragon and Triolet, and Demy and Varda were both bearded marriages between a gay/bisexual man and a woman. Varda creates two portraits of Triolet, one a portrayal by Aragon, in the other Triolet portrays herself. Aragon reads poems in which Triolet is his muse. They clearly fail to capture Triolet who, when interviewed by Varda, expresses - in funny dead-pan - a completely different understanding of her life and her relationship. 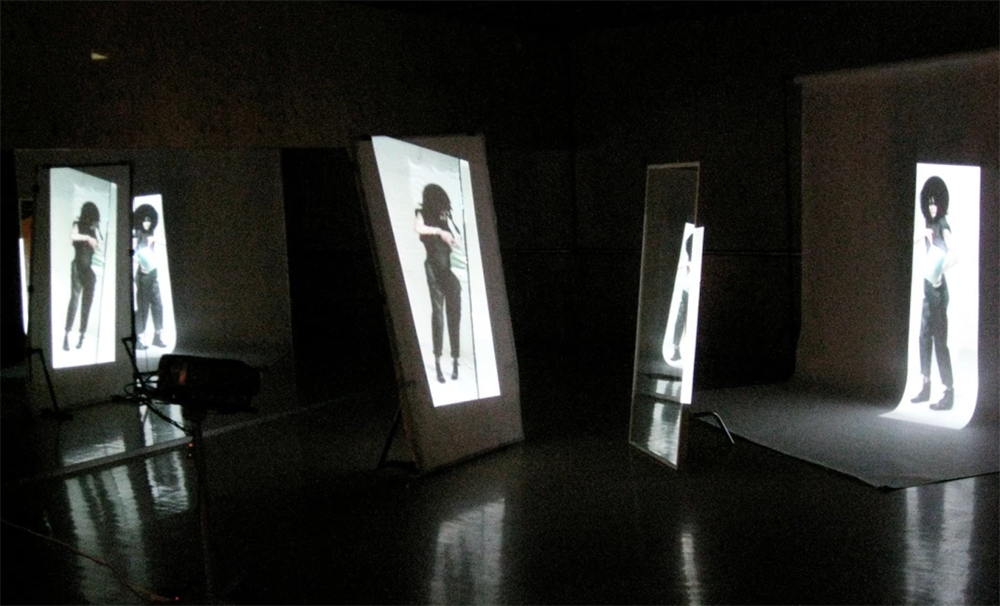 The phrase If You Can’t See My Mirrors I Can’t See You, if understood as a poetic expression as opposed to a direction from truck drivers, suggests a complex configuration which impedes visibility and questions what we see when we look. Our six-channel looped video-installation Glare (2009) was a physical manifestation of this: a multi-faceted set created from projected light, mirrors and screens. The scene suggested the set of a fashion shoot, with a video of a young model at the centre. Dynamics between the model and the women directing her were exposed as she intermittently angled a small hand mirror to offer a glimpse of them.

‘Glare’ has a double meaning, it’s both an optical effect as well as a way of looking, something that happens to you as well as something that you do to others. Looking back, visibility and control were central. The harsh effect of light glaring, as well as the directors’ instruction to ‘try and keep your eyes open’ suggest interrogation. The video of the model was filmed by one of us when working at London Fashion Week. Everyone was working low paid or for free. It was all women and everyone was exhausted, most probably feeling exploited whilst also being a cog in the fashion economy. Ten years later, we’re much more aware of ethical issues - both human and other - throughout the many echelons of this industry and that they ricochet much further than this small array of performers. 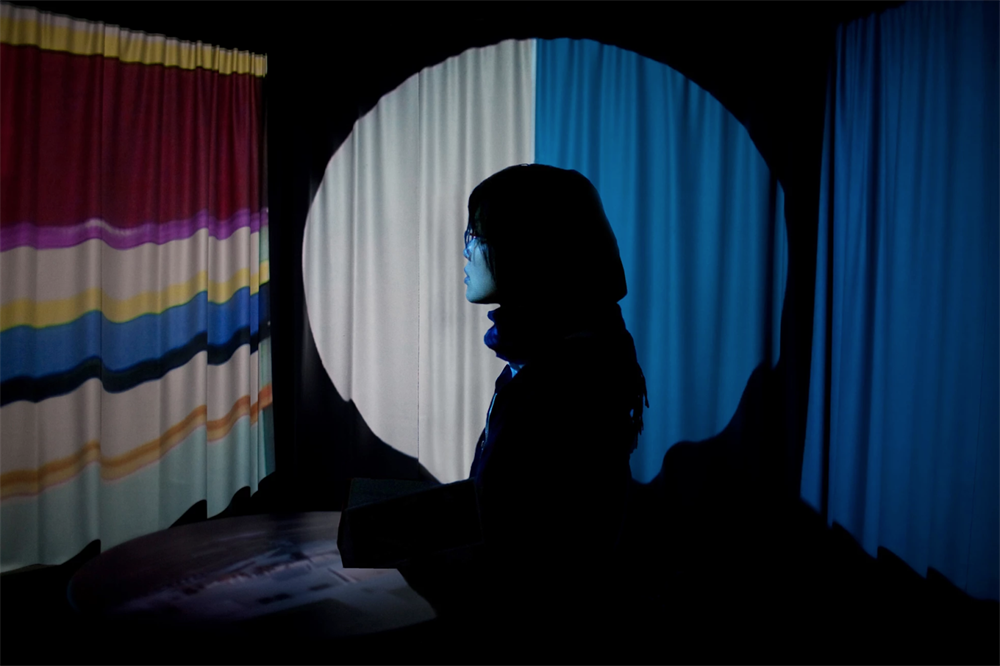 Players was a portrait of Frieze London. The art fair felt like the perfect ready-made stage, reminiscent of Jacques Tati’s epic set for Playtime (1967). Players was a panoramic installation in the round, created live throughout the duration of the fair. We positioned controllable cameras across the site, which fed into a hexagonal viewing booth. The projected video bounced off an array of coloured mirrors, leaving visitors saturated in aestheticised views of the exposition, transforming it into a mise-en-scene incorporating artworks, unwitting fair goers, gallerists, artists and staff. The spectacle was manipulated by us from the backstage location, where we mixed between feeds, and zoomed in and out. The fair appeared as if seen through a digital camera obscura crossed with a Claude Glass. This inverted view toyed with the strange and complex carnival of the art fair which became subject to and of the work - allowing for consideration of this already otherworldly environment and meditation on what or who is to be scrutinised and what is not.

That time hidden away in our dreamlike viewing booth allowed intimate observation of one of the biggest art trade fairs in the world. On reflection, the temporary world of Frieze London is an extraordinary spectacle and logistical feat, but the environment created is weird - characterised by posturing, superficiality, and excessive wealth. The commission felt like an incredible opportunity at the time but it doesn’t seem irrelevant to add that we shared a nominal fee for making it - and the divide between those building the trade fair and the visitors felt oceanic. We’ve been recalling the fair painters and decorators telling us how they had travelled from out of town and were sharing borrowed bicycles to get into work in the morning - which we thought was very ‘Tatiesque’, but it also speaks of the divide between the different players who created and populated this event.

Creating works 10-years apart invites consideration of our own experiences in the intervening time. We made IYCSMMICSY in our 30s and how we’re making this in our 40s, reminiscent of Deborah Levy’s memoirs, one made every decade since her 40s2. John Cassavetes’ Opening Night addresses social norms and aging through various forms of reflection. In the film, Myrtle (Gena Rowland) struggles with how to play a woman of her own age in a stage production. It’s sending her a bit mad. This is unsurprising. She’s tormented by performing someone so like herself.  She constantly sees herself reflected back in the form of her ex-lover's and colleagues’ opinions, people who chose a more normative family life. And there are literal mirrors everywhere. In the backstage of the theatre but also the ‘backstage’ of Myrtle’s life - her bedroom, dressing rooms, bathroom. In these complicated compositions she scrutinises her own reflection. Opening Night is a hall of mirrors that portrays one person’s confrontation with some of the many faces of social convention.

The use of video calls has changed, they can be scheduled to aid daily rhythm and structure, and have become a way to hold oneself accountable. The individual domestic spaces that are now the backdrop to all kinds of online meetings reveal clues to personal circumstances and conjure up narratives. We have been reflecting on the aesthetics generated by this kind of video and how our homes, seen through the video call set-ups, provide two ready-made stages with their own lighting, props and cameos.